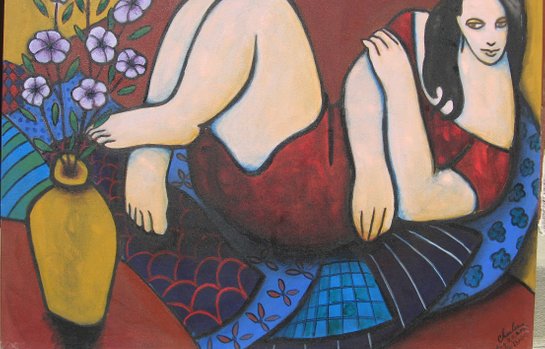 For the past twenty years, Charles Ford (b.1948) has divided his time between Sweden and the United States, finding within each a multitude of reasons to call either home.

His fascination with the “Land of the Midnight sun” began in May of 1995 after meeting members of the Swedish theatrical troupe, Teater Albatross, who where performing at the Theater Project in his hometown of Baltimore, Maryland.

Charles was invited to tour and perform with the troupe on several engagements during Teater Albatross’ U.S tour. He subsequently traveled to Sweden for the first time in July of 1995 to continue collaborating with the theatre company.

Charles has returned to Sweden every year since. During his many visits he has exhibited and created an impressive body of work. The Swedish collection (1995-2015) which contains over 438 paintings, are known for the astonishing use of line, color, form and composition. In each of his paintings Charles captures a feeling of expression at that moment, which usually conveys peace, harmony and beauty. At times they can be ambiguous to the eye of the beholder, but the paintings are always calm.

Charles’ voluptuous figures are relaxed and the wild curves of their bodies emerge from the childish scribble, or the “Innocent Eye”, which Charles uses to begin every work. The “Innocent Eye” technique is based on a 19th century aesthetic worldview proposed by the renowned art critic John Rushkin. It demands that all art be created from a child’s perspective – a notion that was recently shown by scholar Jonathan Fineburg to be the basis of 20th century art. The results are stunning.